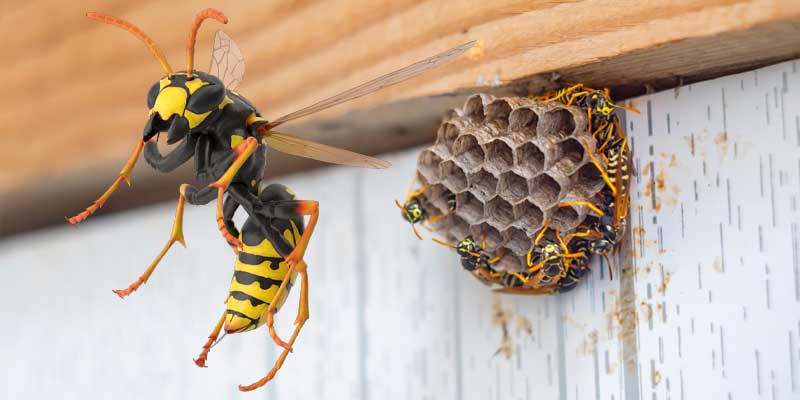 It’s a common scene: you’re trying to enjoy a barbecue in your backyard and you’re interrupted by a flurry of wasps looking for food. Everyone runs in a panic trying to get away from these winged creatures. Have these party interruptions happened to you? What about when you’re in your home innocently watching TV and you see a couple of wasps bumping up against the window or flying around your ice tea?

You could have a wasp infestation on your hands, and the only way to safely get rid of them is to hire a local pest control technician in Gilbert, Scottsdale and Mesa, Arizona area.

Wasps can actually be good for the environment. Because they are parasitic, they prey on and rely on hosts to live. These hosts include all other insects. And because wasps are hunters, they work to reduce the insect population just like spiders do. But despite the fact that wasps are good for thinning the herd, we’re betting you still don’t want them living in your home or yard.

There are more than 100,000 species of wasps out there, and Phoenix is home to many of them, such as yellow jackets (yellow and black stripes), mud dauber wasps (long, skinny waists with nests of mud), and paper wasps (the nastiest and most aggressive in Arizona).

All wasps can be put into one of two categories: solitary or social. As you may assume, solitary wasps live alone and social wasps prefer to live in large colonies of up to 20,000 others. Queens live for one year. Social wasps hibernate in the winter, then build colonies in the spring where they can lay eggs for additional workers. These sterilized females will build the hive, die off, and then those last-laid eggs will continue to prosper into the next season.

Solitary wasps enjoy a lifecycle that is quite similar but they don’t work together to grow colonies like their more socially conscious counterparts do.

Wasps make their homes in hives or nests. Some are as small as a golf ball while others can grow to 20 feet long. These nests can be built pretty much anywhere, but wasps prefer at least some exposure to sunlight throughout the day. You may find hives or nests in holes under the ground, along river banks, in trees or plants, attached to the side of your home, or under your roof’s eaves.

The most active time for wasps is at dawn and dusk, so this is often when you’ll see them darting in and out of their homes. Generally, wasps won’t sting unless provoked; however, they can sting repeatedly, unlike bees that release their stingers into their victims upon that first sting. Wasps are able to retain their stingers so watch out for repeated attacks.

Think You Have Wasp or Hornets?

Wasps are a big problem in hot desert climates because they like the heat so much. It’s best to leave their removal up to the hornet and wasp pros. Schedule your free inspection with our Chandler and Scottsdale AZ pest control professionals if you have a wasp invasion in your home or yard. Feel free to contact us at 480-550-9220.

Get your free quote for termites

Get Free Quote
Earth Friendly Solutions
Our products are specifically chosen to ensure the upmost in environmental safety
Targeted Prevention
We believe that specific, targeted treatments far exceed any random doses of pest control products, even when generously applied.
Insured & Guaranted
Our goal is to provide you with absolute peace of mind. That is why our service is insured and backed up by our special money back guarantee

Affordable, efficient, and environmentally safe pest control company. We offer Organically Derived Products that are safe for pets and kids